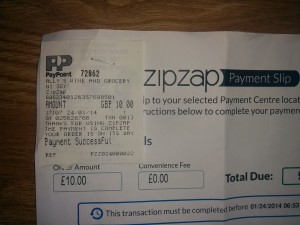 London, 6th February 2014. In a similar way to how people pay gas and electricity bills, people in the UK can now buy Bitcoins with cash on Bittylicious.

Bittylicious has launched a new service which enables prospective buyers to purchase Bitcoins by handing over cash at any one of over 28,000 ZipZap locations in the country. The process is very simple, and any user that has had their identity documents verified by Bittylicious can obtain Bitcoins this way.

Users simply need to choose how many Bitcoins they want, locate a local payment centre within the Bittylicious website and print off a payment slip to show to the cashier. Alternately, as long as the barcode is clearly available, they can show this to the cashier on a mobile device. The payment centres are typically small supermarkets and other local shops. Within a few minutes of the payment being taken, the Bitcoins are released into the buyer’s Bitcoin wallet.

In the near future, it will also be possible to buy a variety of altcoins, such as Litecoins, Feathercoins and Dogecoins, for cash using the Bittylicious service.

ZipZap, Inc. provides the payment network itself, and plans to offer more territories soon. Founded in 2010, ZipZap is headquartered in San Francisco, California, with operations around the globe.

Update: Bittylicious has also published a step by step guide showing users how to do cash purchases.

Press Releases Comments Off on Bittylicious Allows Users To Buy Bitcoins With Cash At 28,000 UK Locations